Congrats to Matthew Nash for winning 2018/2019 season Angler of the Year with 574 points total. Matt finished the year with one first place finish, 2 second place finishes and 4 third place finishes to end the season placing very consistently to gain points and win the AOTY for 2018. 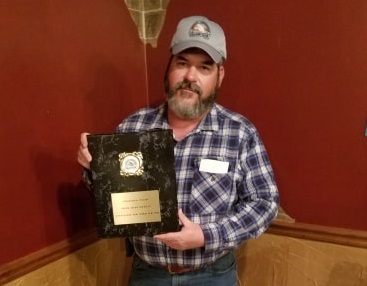 MTCC would like to congratulate Robert Baker & Larry Britton who dominated the 2017/2018 season pretty much from start to finish with many impressive weigh-ins. They definitely proved too tough a team for anybody to beat out for total points on the season. Congrats to them for a great 2017/2018 season. They shared bragging rights for AOTY winning with a total of 462 points. Joey Davis came in 3rd place with 451 points Rodney Edwards in 4th with 439 and Coby Edwards rounded out the top 5 with 437 points. Robert & Larry also won team of the year 2017. 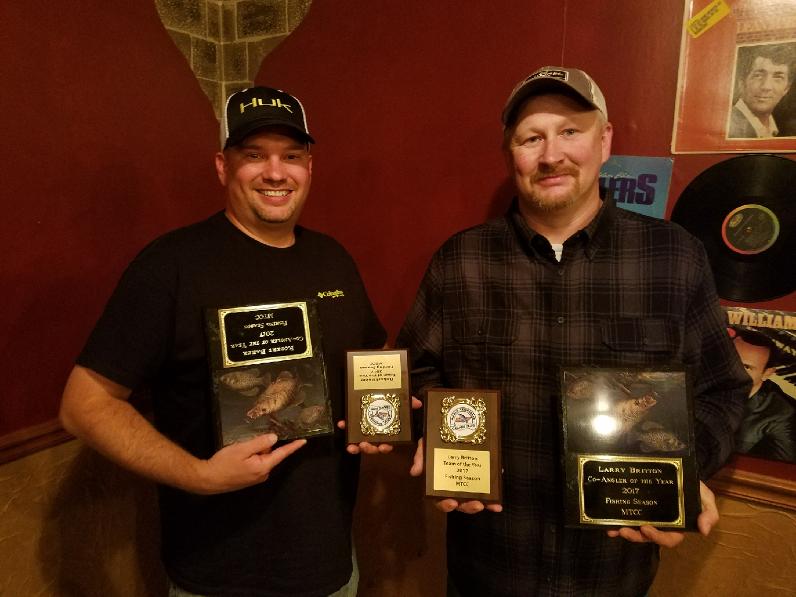 MTCC would like to congratulate Coby & Rodney Edwards for winning Angler of the Year 2016/2017 season. They finished the year with 448/points, owning a tie breaker over Joey Davis. WTG Men. Awesome year. :) At last tourney of year, Joey had to finish first and the Edwards boys 7th or less. They finished 7th place & Joey got 2nd place. 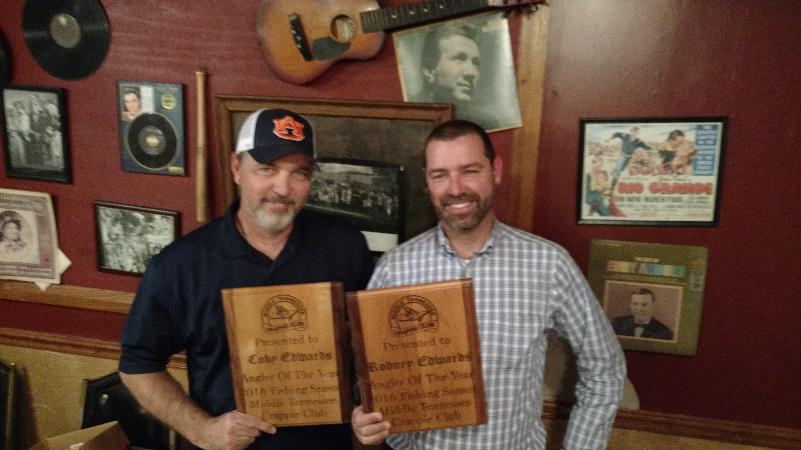 What a year 2015 was. First year we ran our year as March through Feb 2016. When we got down to the final tournament of the year in Feb, there were realistically about 3-5 different anglers with a good shot of winning AOTY. With how it came out, almost any of the 5 could of done well in tournament and won but none placed in top 5 besides Mr. John Wells. He finished in 5th place, one spot above Rodney Edwards who had leading over John by 2 points. With John taking 5th & Rodney finishing with 2 points less, it resulted in a tie for AOTY points. We had a tie breaker already in place in case this happened which was best day at all 3 lakes added together. It turned out that Mr. John had more points and became our 2015/2016 AOTY. Photo shown below is from his only 2015 win which came at Tim's Ford in March. Only two boats had more than one win on the year which made 2015 a very close race and exciting year. Congratulations on being our 2015/2016 season Angler of the Year Mr John. You worked hard for it and it worked out for you. Good luck all in 2016. 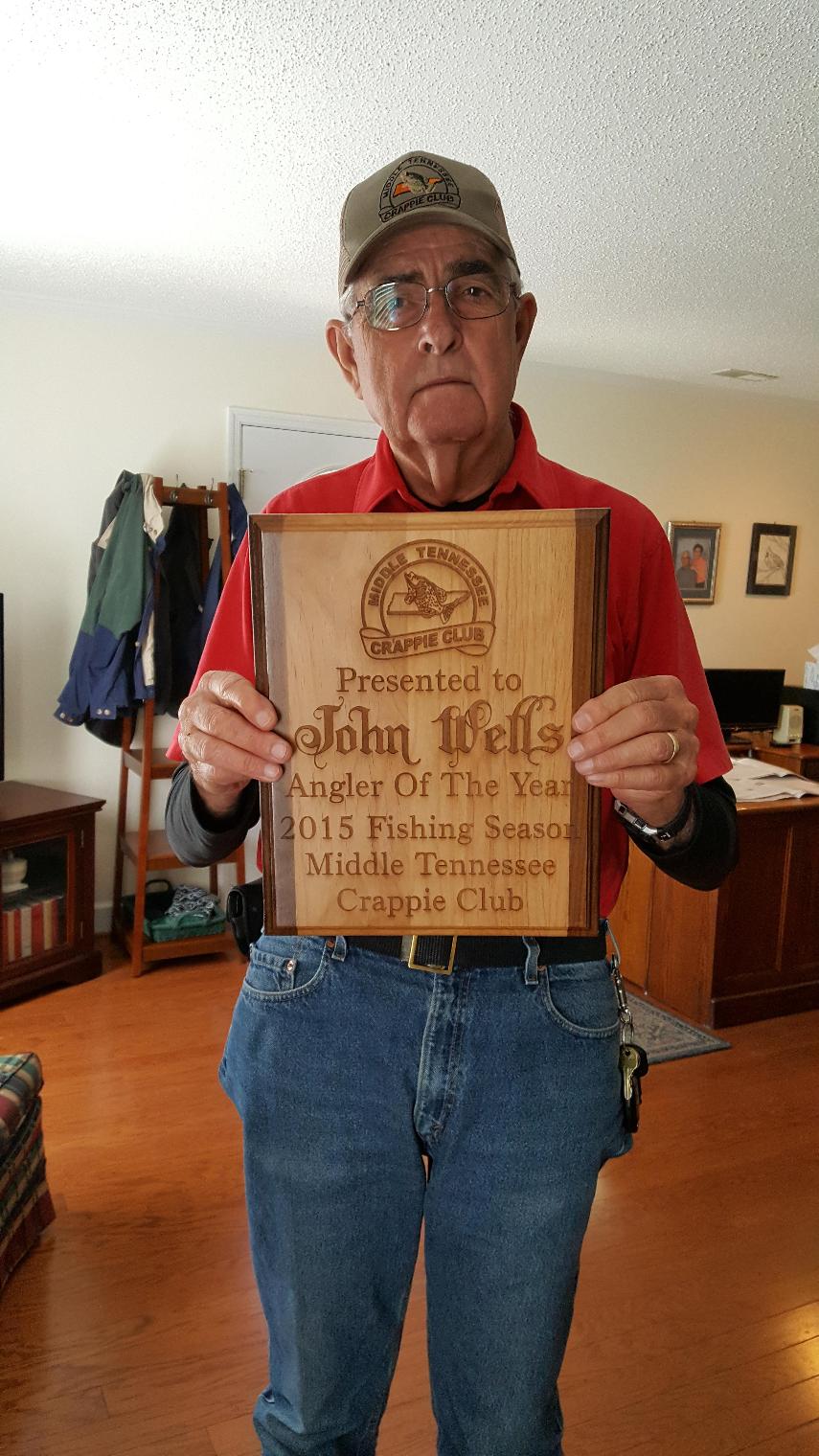 MTCC wants to congratulate Joey Davis our 2014 Angler of the Year. Joey started out the year in the lead after January's  tourney and held it the entire year. He also won 6 tournaments in 2014, three alone and three with two different partners. Joey ended the year with just over 1200 points. Congrats again on an outstanding fishing season. 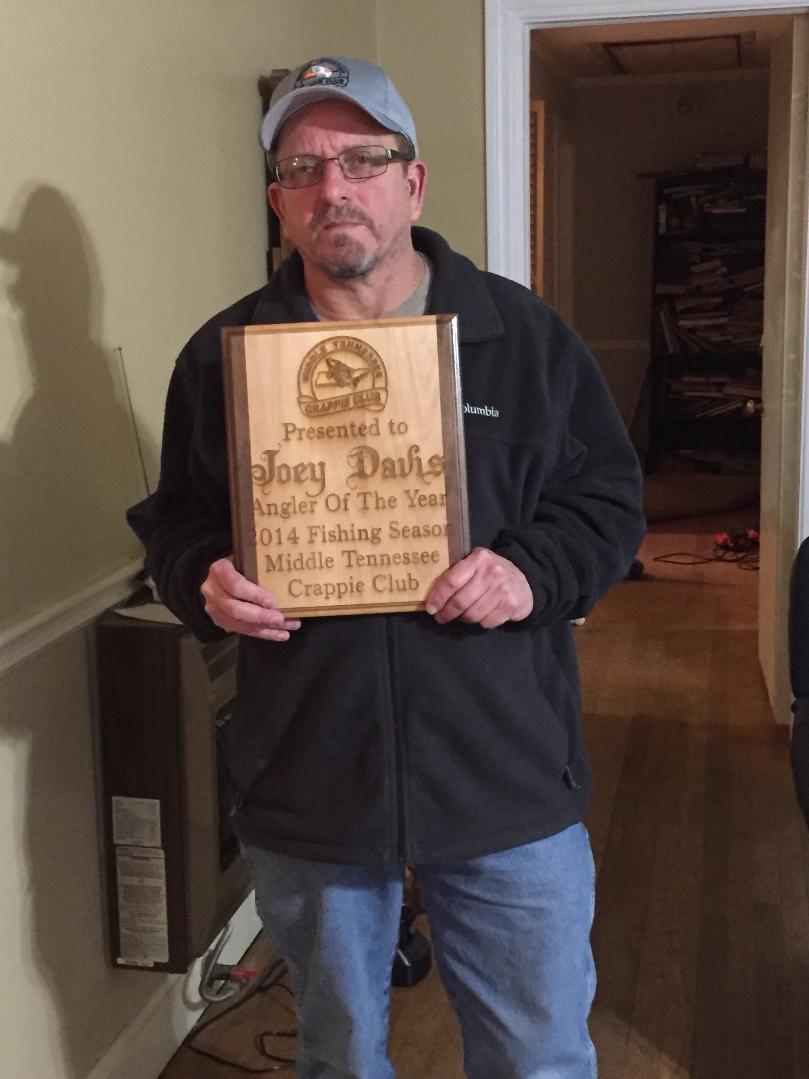 MTCC wants to congratulate Toby Ivey for his back to back to back winning of the coveted MTCC Angler of the year in 2013. Joey Davis started 2013 as our points leader and remained till the August tournament where Toby briefly took the lead but then in September he did not weigh in any fish and JW Jackson took the lead and held until the December Classic tourney weigh in. Toby, turned in an impressive stringer to over take JW Jackson who had the lead going into the final day.  Toby ended the season with 906 points while JW had 855 points.  This was a close one and was fun for all.  Congratulations again Toby! 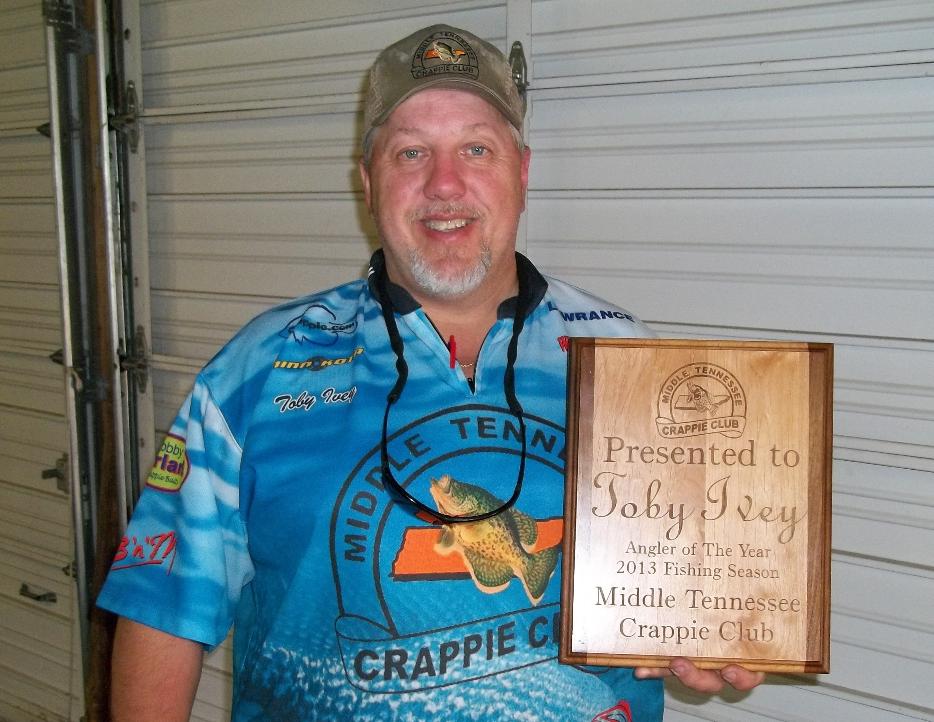 JW and Kain Jackson with the 2013 Team of the Year Award. 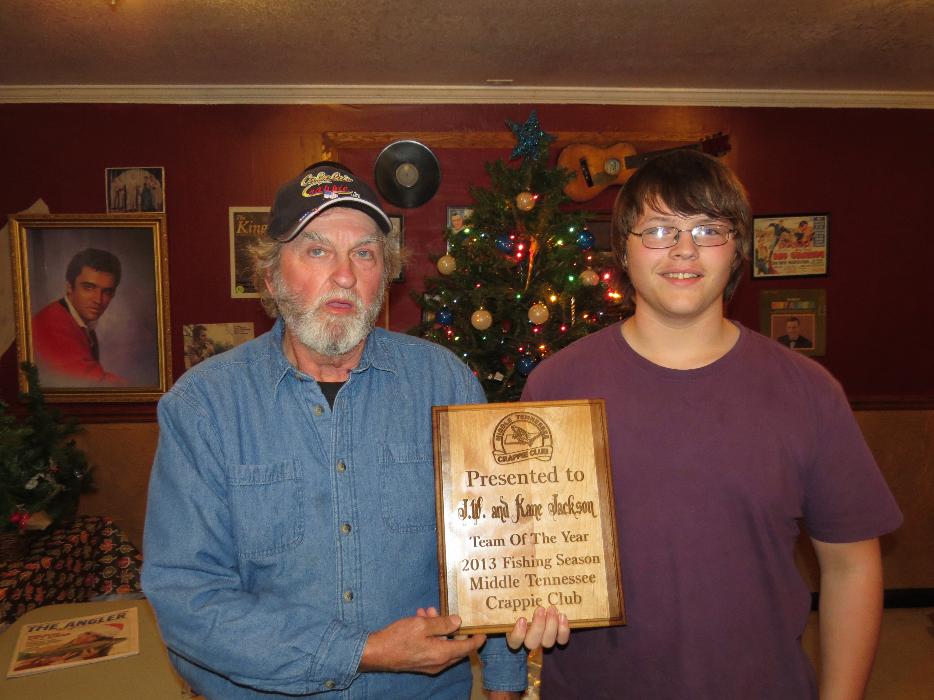 Joey Davis with the Sportsman of the Year Award. 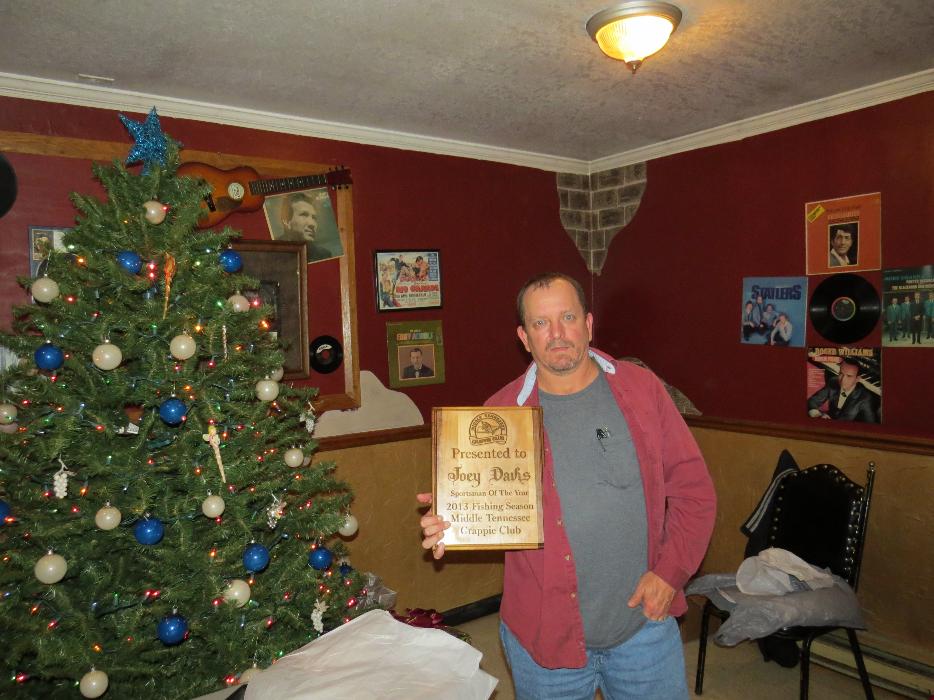 MTCC  wants to congratulate Toby Ivey for winning Angler of the Year 2012. Toby said he spent all of 2012 watching other anglers swap the AOTY race lead back and forth and never thought when the Normandy tourney was over and we only had 4 fish in the box that there was even a chance of winning the tourney, much less AOTY. Toby would like to also thank the 6 guys who fished with him in 2012 and helped him be able to claim this honor. When asked at the tourney, what's it take to be AOTY, Toby replied lots of help from fishing partners. 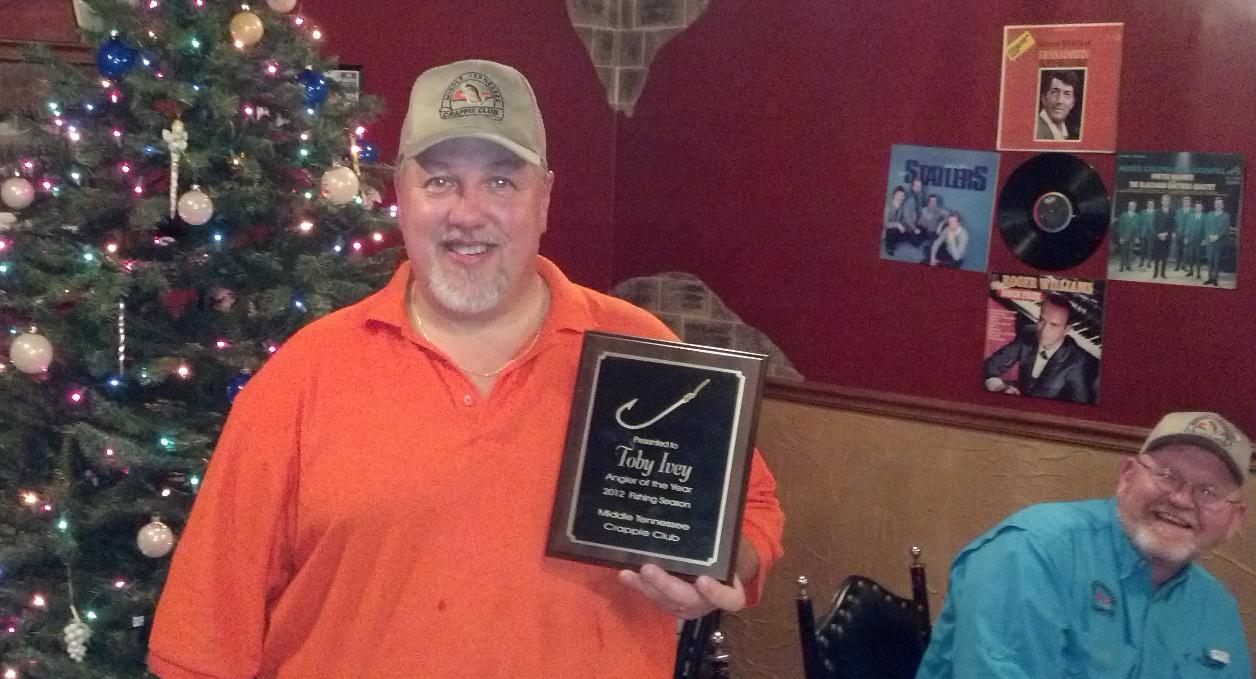 Congratulations to Toby Ivey for winning the 2011 Angler of the Year award.Toby won the honor by winning the last tourney of the year in 2011 and winning enough points to keep him ahead in the chase there at Woods Reservoir. He beat out John Wells in a close race for the title. Congrats on a great year in 2011 and good luck to you and everybody else in 2012. 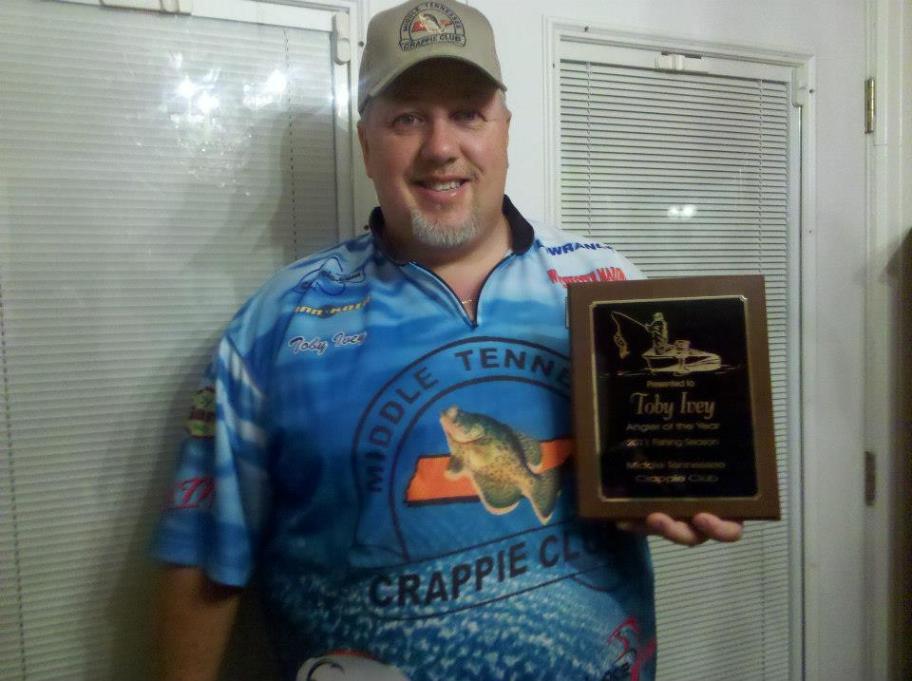